Today a growing number of Indigenous peoples are engaged in the process of 'nation building': they are expressing greater desires for self-governance and creating legitimate and effective governing institutions. Depending upon community and location, nation building is at different stages; some Indigenous nations already possess decision-making institutions, whereas others are just starting conversations about self- governing. These differences provide the opportunity for university-led scholarship concerning this critical legal, social, economic and political development.

Within these broad objectives, our project has three specific aims: 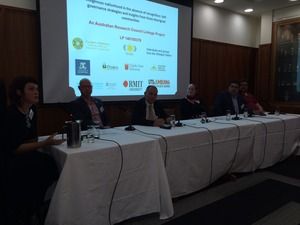 The salon-style discussion illuminated how certain Indigenous communities are building thriving, self-sufficient, and economically sound Indigenous Nations, capable of ensuring the wellbeing of their lands and peoples. The panel members discussed the international and Australian research that highlights the importance of community-level Indigenous self-determination in a climate of unsuccessful indigenous policies. The audience heard the stories of success through self-reflective and evolving governing systems of the Ngarrindjeri Nation, Gunditjmara People and Wiradjuri Nations, who are strategically engaging their citizens to determine their futures.

Attendees were diverse, from the university, government and community organisation sectors. They were asked to engage through a concluding question and answer session around how thriving, strong Indigenous nations that self-govern and determine their own priorities can benefit all of Australia.