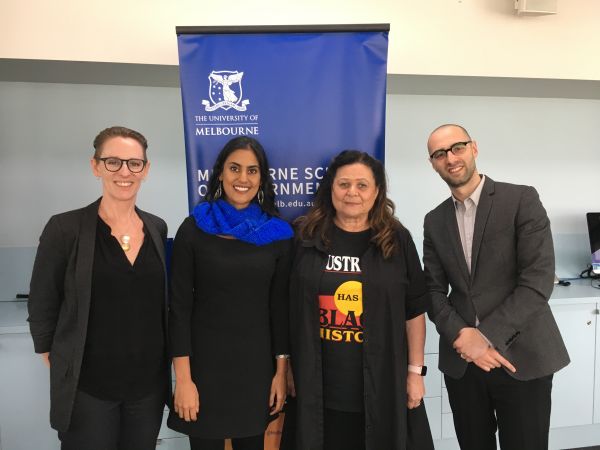 About the Doctoral Academy Previews

The Melbourne School of Government is proud to present its Doctoral Academy previews. These previews will enrich the university experience of PhD students, and showcase the advantages of participating in the Doctoral Academy. The Doctoral Academy is a new initiative by the Melbourne School of Government. It will be formally launched in mid 2019 and will provide high performing PhD students with additional support, professional development, and networking opportunities. These previews are designed specifically for potential participants in the Academy.

In this event, the third and final Doctoral Academy preview, a panel of three experts discussed academics discussed Indigenous self-determination. Questions were submitted by PhD students upon registration, and on the day Dr Shireen Morris presented and directed panel discussion of questions. The panel members were:

Professor Sarah Maddison - School of Social and Political Sciences, University of Melbourne, has published widely in the fields of reconciliation and inter-cultural relations, settler colonialism, Indigenous politics, gender politics, social movements, and democracy. Her book Black Politics: Inside the complexity of Aboriginal political culture (2009) was the joint winner of the Henry Mayer Book Prize in 2009.