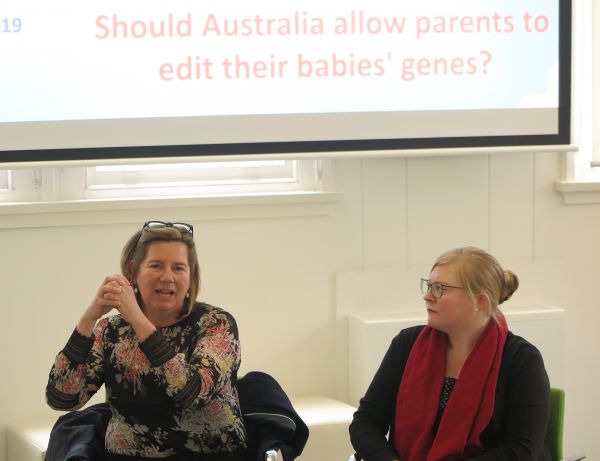 Until recently, the idea of deliberately altering heritable genetic traits in the human gene pool has been the realm of science fiction. However, developments in China and Russia have shown that we now have the technological capacity to edit the human genome in embryo leading to live births; in these instances, in the purported hope of preventing HIV transmission and curing blindness. With the 2018 births of what are thought to be the first genetically edited human babies, and in the age of medical tourism and global medical markets, Australia will need to consider its stance – legal, ethical and social – on whether parents should be allowed to edit their child’s genes, either in Australia or overseas.

Dr Jane Brophy, Postdoctoral Fellow at the Melbourne School of Government, will discuss the social, ethical and legal implications of this new development in global biotechnology. She will be in conversation with Associate Professor Megan Munsie, of Stem Cells Australia and the Centre for Stem Cell Systems.

This event is co-hosted by Melbourne School of Government and Health, Law and Ethics Network (HLEN).

Jane was awarded a PhD in Sociology at Monash University in 2017, with research interests spanning medical sociology, the study of science and technology in society, medical anthropology and contemporary China studies. Jane also holds a BA and MA (China studies) from the University of Melbourne, as well as a diploma in Chinese language (Mandarin), and has spent over ten years working as an interdisciplinary qualitative researcher in Australia and abroad. Jane’s doctoral research utilised moral economy theory in an analysis of the market for stem cell ‘tourism’ in China, with a focus on Australian patients travelling to access treatments considered ‘unproven’ in Australia. Her postdoctoral project continues the theme of researching the social dynamics of science and technology in society; in particular, the challenges and opportunities for the transnational governance and regulation of new and emerging biotechnologies arising in contexts where people, ideas and institutions are globally mobile and not limited by national jurisdictions. Jane’s coauthored book, Stem Cell Tourism and the Political Economy of Hope (2017, Palgrave Macmillan) was awarded the Australian Sociological Association ‘Stephen Crook Memorial Prize’ for the best book published in Australian sociology 201617. She was recently a guest on the University of Melbourne Asia Institute’s ‘Ear to Asia’ podcast, speaking about the healthcare system in China.

Associate Professor Megan Munsie leads the Engagement, Ethics & Policy Program for the Stem Cells Australia initiative. Over the course of her 20 year career in stem cell research Megan has combined her scientific expertise – gained through working in academia and industry – with a deep understanding of the issues associated stem cell research and its clinical translation. She has coauthored numerous educational resources for the public, health and educational professionals; contributed to the development of policy at a domestic and international level; is a member of several international multidisciplinary research teams exploring impact of stem cell research and regularly provides advice and information to Australian patient advocacy groups and community members on stem cell science and associated issues. Megan is Deputy Director of the University of Melbourne’s Centre for Stem Cell Systems within the School of Biomedical Sciences. She has always been fascinated by technology and its impact on society and in addition to her career in stem cell science worked for over ten years as an embryologist in Australian IVF clinics. In 2018 she was awarded the Public Service Award from the International Society for Stem Cell Research in recognition of her public outreach and policy advocacy in stem cell science. She has a Bachelor of Applied Science from QUT, a Masters in Reproductive Sciences and a PhD from Monash University. It was during her PhD in 2000, in which she was the first person to demonstrate that stem cells could be made from ‘cloned' mouse embryos, that A/Prof Munsie saw the need for scientists to engage with regulators and the public.