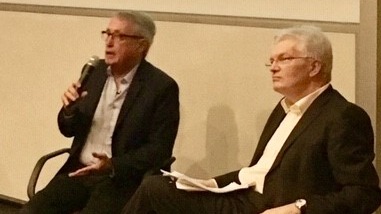 We pride ourselves on living in a society with high levels of equality and low levels of social heirarchy. For at least two decades both major parties have associated ‘progress’ with a stronger economy and the opportunity for a ‘fair go’. Inequality and social disadvantage, where it persisted, was to be addressed through welfare or other social assistance measures. But is this received wisdom changing?

There is increasing talk of economic inequality, of the perils of unconstrained greed, and that economic policies themselves may be driving inequality. Some have spoken of the need to ‘rein in’ the excesses of the rich. Others have pushed back against what they see as ‘the politics of envy’ and the resurgence of ‘class talk’.

Wayne Swan, National President of the Australian Labor Party and a former Federal Treasurer, has argued that the era of ‘trickle-down’ economics is over. He was in conversation with Glyn Davis, former Vice-Chancellor of the University of Melbourne. They discussed the changing political discourse on inequality and what this change means for Australian politics today.

About the Lecture Series

The Melbourne School of Government is hosting this series of public lectures and engaged conversations on the issue of economic inequality. Prominent invited speakers, from academia and beyond, will look at various dimensions of the question of economic inequality. Is economic inequality increasing and, if so, with what political, environmental and social effects? Does inequality matter if the economic pie is growing? Does it matter how much executives are paid? What is the link between inequality and our tax and welfare system? Is the changing world of work and changing technology increasing inequality or is it inequality-neutral? Are we seeing the re-emergence of class politics or are other forms of division more evident, say between young and old or between ‘rootless’ elites and the rest? These are some of the questions informing this series.