Hosted by the Melbourne School of Government, this event celebrated the launch of a new book by Jeremy Baskin, titled ‘Geoengineering, the Anthropocene and the End of Nature’.

Jeremy Baskin is a Senior Research Fellow at the Melbourne School of Government. His book Geoengineering, the Anthropocene and the End of Nature was published by Palgrave, and launched by School of Social and Political Science Professor Robyn Eckersley. 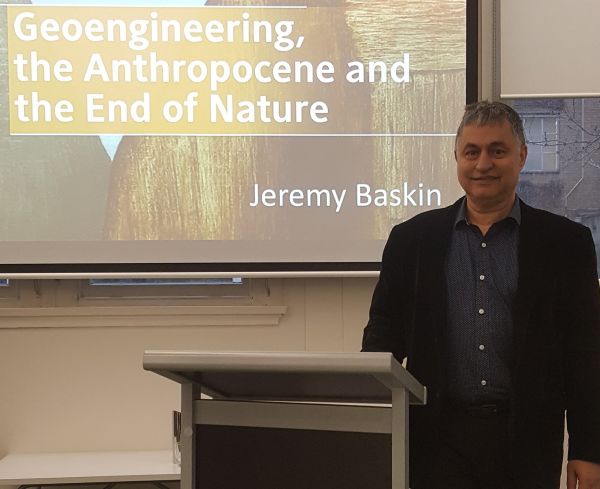 Mr. Jeremy Baskin, the author of 'Geoengineering, the Anthropocene and the End of Nature' Geoengineering, the Anthropocene and the End of Nature takes a critical look at solar geoengineering as an acceptable means for addressing climate change. It explores the assumptions and imaginaries which animate ‘engineering the climate’ and discusses why this climate solution is so controversial.

The book explains geoengineering’s past, its revival in the mid-2000s, and its future prospects including its shadow presence in the Paris Climate Accord. The main focus however, is on dissecting solar geoengineering today – its rationales, underpinning knowledge, relationship to power, and the stance towards nature which accompanies it. Jeremy Baskin explores three competing imaginaries associated with geoengineering: an imperial imaginary, an oppositional un-natural imaginary, and a conspiratorial chemtrail imaginary. He seeks to explain why solar geoengineering has struggled to gain approval and why resistance to it persists, despite the support of several powerful actors. He provocatively suggests that reconceptualising our present as the Anthropocene might unwittingly facilitate the normalisation of geoengineering by providing a sustaining socio-technical imaginary.

“Climate change is altering social worlds as much as physical environments, not least by changing what we imagine ‘solutions’ to climate change could look like. Baskin offers a penetrating analysis of one of these new ‘climate solutions’: solar geoengineering. He makes very clear that at the centre of this new socio-technical imaginary lie questions of knowledge, values and power... Solar geoengineering technologies ask questions about what it means to be human, what type of world we are, and should be, making. Read this impressive book before others take ownership of your future.”
Mike Hulme, Professor of Human Geography, University of Cambridge, UK

“Baskin demonstrates why solar geoengineering, a climate solution that even its ardent advocates find troubling, may still be an idea whose time has come. To make sense of this paradox, he shows, we have to understand solar geoengineering not merely as a technology but as a powerful driver of the human imagination.”
Sheila Jasanoff, Pforzheimer Professor of Science and Technology Studies, Harvard University, USA

“Solar geoengineering has received important booklength treatments, but none have analysed the post-war history and contemporary discourse with this combination of breadth, depth and perceptiveness.”
Bronislaw Szersynski, Reader in Sociology, Lancaster University