This year IPAA Victoria ran its first public sector week from 22-26 June, a series of events hosted by a range of public, private and not for profit organisations aimed at raising awareness of the work of the public sector and exploring some of the key issues the sector is facing in Victoria and beyond.

The Melbourne School of Government held several events throughout the week including: Finding the Perfect Match: Value From Consultancies: This session, co-sponsored with KPMG, brought together Simon Corden, KPMG Director, Dr. Sara Bice, Melbourne School of Government, Professor Helen Sullivan, Melbourne School of Government, and Marlo Baragwanath, Director – Office of the CEO, Victorian Building Authority for a panel discussion on how to get the most from your consultancies.

Utopia: Fact or Fiction: This light-hearted debate sought to answer the question once and for all: Is the television show Utopia fact or fiction? Our six debaters came from academia, NGOs, and civil service backgrounds. When the votes were tallied, it was decided – Utopia is fiction. A video of the debate will be forthcoming and hosted on our new website democracyrenewal.edu.au 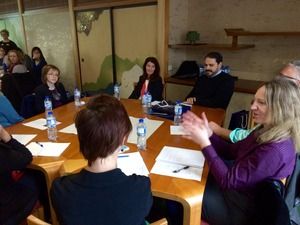 Melbourne School of Government Masterclass – Leading Across Boundaries: Facing Up to the Challenges of a more Consolidated World. This highly interactive Masterclass featured Melbourne School of Government’s Professor Helen Sullivan and Professor Janine O’Flynn. Participants had plenty of time for group interaction, workshopping their real-life workplace challenges, and asking questions of the expert faculty.